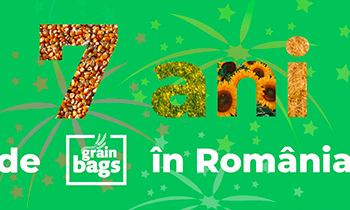 More than 1.5 million tons of grain stored in silobags, more than 500 satisfied customers, an increasingly varied range of silage machines, 2 types of silobags: Plus and Premium, 2 open offices in Romania and about 15 employees. This is what Grain Bags looks like, when celebrating 7 years since its market launch.

The Grain Bags company celebrates its anniversary every year, right around the harvest campaign. It is a moment of joy both for the representatives of the company and for the farmers who then collect the fruits of their labour. This year, however, when the harvest began, the port of Constanta was very crowded, a situation generated by the war in Ukraine and the problems related to grain export.

“Now, what I predicted two or three months ago is happening. Constanta Port is overcrowded and many farmers will be forced to sell their goods at low prices to intermediaries, because they don’t have storage space. The sale prices dropped extremely, even by 20-30 euros. Moreover, some of those who buy grain have changed the delivery conditions and buy only FOB (free on board) goods, that means all expenses return to the farmer, except for transport and loading on the ship, “, explained Alexandru Baciu, farmer managing an integrated business.

2. Over 500 customers have stored in silobag

Even if at the beginning of June, the former Minister of Agriculture, Adrian Chesnoiu, assured that our country has a storage capacity of 29 million tons, of which 15 million in warehouses and 14 million in silos, in reality not all of them are functional. Furthermore, storage prices are not at a level that can be sustained by all farmers.

Silobag is the economical, safe and efficient solution for grain, feed, silage, corn, fertilizers storage and other bulk materials. Already, over 500 customers have stored over 1.5 million tons of grains in the Grain Bags silobags.

Grain Bags has stored a record amount in silobags, over 15,000 tons of grain stored at a single farmer. With a turnover of 2.2 million euros in 2021, company representatives predict for this year a 50% increase. All this is because farmers trust the premium products and services offered by Grain Bags.

Year after year, the company and the Grain Bags team have continuously developed.
This year alone, the following were achieved: new headquarters in Cluj-Napoca, in addition to the one in Piatra-Neamț, a new method of financing farmers through a partnership with BT Leasing. Grain Bags attended more and more events in the field, but also online.
Several development projects are underway, including the launch of a new, easy-to-access website that includes all Grain Bags products and services, as well as many other surprises that will be revealed along the way.

4. Selling the crop in 3 stages

“According to experts, it is best to sell the production in 3 stages: 30% before harvest, 30% at the time of harvest and 30% after harvest. This is to for the best price, which is usually the average price. Like selling 1 kg every day.

On the 7-year anniversary, I would like to thank the Grain Bags team that has grown up beautifully. All our colleagues are passionate about what they do. We are constantly working and growing to cover the entire territory of the country as best as possible. We do everything we can to help farmers, to offer them storage spaces in silobags.” says Narcis Ranghiuc, Grain Bags general manager.