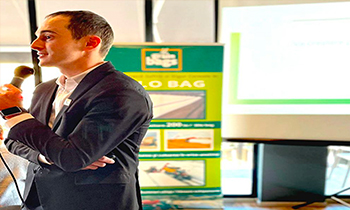 Romania grain production is increasing and it was estimated at 34.16 million tons in 2021, four times higher than in 2007 (Source: Romanian Farmers’ Club), that means that the existing storage spaces are clearly insufficient. Even though, in theory, Romania has storage capacity of 26 million tons in silos and bases, in reality an important part does not operate at full capacity.

The official estimates show that our country will produce 40-45 million tons of grain in 2030. Under the given conditions, Grain Bags Romania sounds the alarm and came with an effective, economical and save solution – the silobag system.

“As Lucian Buzdugan, Senior Advisor at Al Dahra Agriculture, once said: «the silobag has become a permanent technology in Big Island of Brăila ». The same principle applies to our other customers, who, after noting the system utility, no longer rent the machines, but prefer to buy them from us.”, said Narcis Ranghiuc, Grain Bags Romania general manager, during “How grain storage looks in Romania” event, organized by the company, on January 14, 2022, at the Ferma Baciu Restaurant, in Bucharest.

Last year he most stored materials in the giant bags were grain: wheat, corn, sunflowers and feed: crimping, corn silage, alfalfa silage. The silobag loading record for 2,500 tons of wheat stored in a day, was in Constanța county, at a grain trader.

“There are many farmers who cannot afford to store their grain, that is why Grain Bags offers a complete solution which provides the financing for grain storage and the farmer will be able to sell his crop at the right time, for the best price”, added Narcis Ranghiuc.