Find out about other farmers experiences when storing feed in silobags 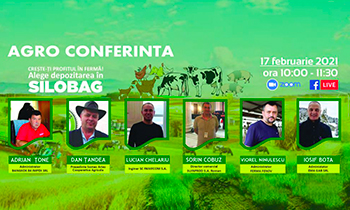 Iosif Bota, EMA Gab administrator, explained why he decided to store in silobags, when he was preparing to invest in a traditional silage construction. He said that the silobag is perfectly for feed, he tested with brewers’ grains. He also explained how the system has benefited him over time.
“I learned about silobag technology in 2007-2008. At that time, we were planning to invest in building a silage because we needed to store large quantities of corn silage, given that we had a 500 cows herd. Then I found out by chance about this innovative method of storage and I was excited about the idea because I didn’t have to build silage anymore. We only needed a flat platform, which didn’t even have to be concreted”.
“I store approximately 750 tons, in three silobags. So, from September to April, I don’t care if the breweries work or not, because I have my own quality brewers’ grains, bought at a good price and stored perfectly all year round”.

An important economical aspect mentioned by Iosif Bota that he no longer needed heavy machinery for laying silage in the cell. The system flexibility and the fact that you can manage the exact quantity you want to store, convinced Iosif Bota to remain faithful to the silobag system.
“Over time, we also noticed the system flexibility. You can interrupt the process whenever you want, in case a machine breaks down or if the weather is bad. You are not under pressure as in in case of classic technology, when the cell must be closed as quickly as possible so that the product does not degrade. Another advantage I discovered is the exact management of the quantities you store and consumed. You know exactly how much you are consuming. Thanks to these advantages, the quality of stored products is kept perfectly”.

2. "There are many Cooperative farmers that are interested in silobag system"

Many livestock breeders, Someș Arieș Cooperative affiliated have been successfully using the silobag system for almost 2 years, especially for the corn paste storage. However, there are still farmers within the cooperative who plan to try this storage system, after seeing how well it works for others, said Ioan Oprița, Someș Arieș Cooperative general manager.
“We started using the silobag two years ago, especially for storing corn paste. We had five farmers who joined and who also provide services to other colleagues within the cooperative. We have not stored corn silage yet, but it is possible that some farmers will store corn silage this year. I can tell you that everyone using this system for corn paste, is extremely satisfied, both as a preservation method and in terms of costs. There are still colleagues who plan to try for the first time silobag technology and that is why, we are thinking of buying more silobags through the Cooperative.
He also added that the silobag is “an efficient method, an alternative to farmers that don’t have the infrastructure to store certain types of feed. If you take into consideration the losses you eliminate, that you don’t have problems with mold, that you no longer have drying costs, the silobag is not an expensive storage alternative” – Ioan Oprița, Someș Arieș Cooperative general manager.

As for Someș Arieș Cooperative future plans, Ioan Oprița mentioned a FNC construction, with a capacity of 10 tons per hour, a project worth 3.2 million euros. He also said that farmers are secure in terms of selling milk within the association, because they have contracts with processors that have been going on for more than 10 years. “However, last year was a tough one as there was an important milk surplus in the market. The cause was the consumption decreased , because people try to save money.”

Mr. Paris, from Fenov farm, explained that his first experience with the silobag was 7 years ago, when he borrowed a silobag and a loading machine. “Year after year, we silage grain and brewers’ grains in these huge bags. We have the advantage of being located close to the brewery and thus, we store brewers’ grains annually, somewhere around 3,000-4,000 tons”.
He mentioned that he sold 200 tons of silobag wheat in January and that half of the quantity was for bakeries.
Now, it was his turn to help other farmers store in silobags, after they saw how easy is to store grains in silobag. “Last year, I lent the loading machine and a silobag to a farmer who works about 200 ha of land. He saw how the system works and now he has this summer’s harvest in silobags”.

4. "Attention when sealing the bag at the ends"

At the Panifcom farm, silobag technology has been used for more than 10 years, for grain storage, brewers’ grains storage and crimping corn. It is also used as a reserve solution for storing feed, corn silage or alfalfa silage.
“The silobag is our back-up solution because we have quite a large herd of 2,000 cows, we make somewhere between 10,000-15,000 tons of silage each year. We have some self-propelled forage machines that we use and we put the silobags on concrete, like that we have a very easy loading process.” – Lucian Chelariu, Panifcom head of farm.
The high quality of the silobag stored feed is an important advantage. Also, the higher humidity at which the grain can be stored is another one. “You can store corn and wheat with 18-20% humidity, without any problems.
But when we stored the rapeseeds, because it had some vegetable remains, I had to quickly intervene, get it out of the silobags because the ignition phenomenon was occurring. So, if you are at the limit with the humidity and you also have plant remains, then you need to pay more attention. Most of all I like to store crimping in these silobags because the lactic acid fermentation takes place, somewhere at 28-30% moisture and there are 0 losses. It is very important to pay extra attention when sealing the ends, take the air out and losses are insignificant”.
Production per cow was over 41 liters of milk in 2020. “It’s a high level, that can be reached easily, but it’s hard to maintain.”

Sorin Cobuz, Suinprod SA Roman, commercial manager, talked about storing for the first-time barley and wheat in silobag, 10 years ago.

Initially, he was afraid because the crop had 15% moisture. But when he opened the silobags the following spring, he noticed how everything had been preserved perfectly and the losses were very small. “Then, we decided to store 3,500 and 4,000 tons of crop, we arranged the bags on sand and earth. I also bought the loader machine, which I had rented at first”.
As problems, he mentioned the fact that when he placed the bags on the concrete area, small holes appeared in the silobag, but he intervened in time and since then he also chose to use silobag protective nets. His conclusion is that “the silobags sit best on a sand layer, although initially we thought that the sand will retain water, but there were no inconveniences.”

6. "The silobag kept my green peas free from ladybugs"

The silobag system passed the test in Alexandru Haită farm, the stored peas did not develop ladybugs. “I had very good results; I kept the peas for about 4-5 months. The following year, we stored 1.000 tons and now we have reached 2,500 tons.”
He also mentioned that the Tinoasa Cooperative affiliated farmers are more and more interested in storing their harvest in silobags, even those who own silages, because the silobag system is a quick and economical option.